"Ah, yes, one more thing: I carved my name into the mast on the seaside. When the American Star will really vanish one day, then something from me will go down as well. I do not want that.

And therefore, she will stay with us for a long time."

Just four months after "his" mast on the seaside disappeared during the collapse of the wreck, Dirk Evers - native of Hamburg - who had written the lines above in regards to his report "Between Rust And Danger (1)" also left us. In July 2007, he was killed during a motorcycle accident in Schleswig Holstein on the infamous B 404 ...

During the course of one and a half year up to now, we got to know and appreciate Dirk through various e-mails and photographs, which he sent us, and through a personal meeting on Fuerteventura in February 2007.

We like to dedicate this page in memory of him - a declared fan of the American Star ...

First, I really like to complement you working so hard on the distribution of information about the American Star. In June 2003, I went to the wreck and was also captivated right away by the first glimpse at the American Star. For a long time, I have not visited your webpage, which was a big mistake.

Because of what I was reading and seeing there on photographs, I have become sad. I am shocked by the condition and would have never thought that it probably will not take too much longer until you cannot recognize anything anymore. At that time, I climbed on board of the ship (but not without injuries) but I promised myself after four hours visiting the ship: You will go on board again in five or six years.

But now, I can forget about that! Too bad; however, I will not ever forget this adventure. Also, a cabin key will remind me for the rest of my life.

Please do not stop to update information and photographs on the webpage.

Kind regards, Dirk
P.S. Enclosure one photograph (there are about a dozen more). 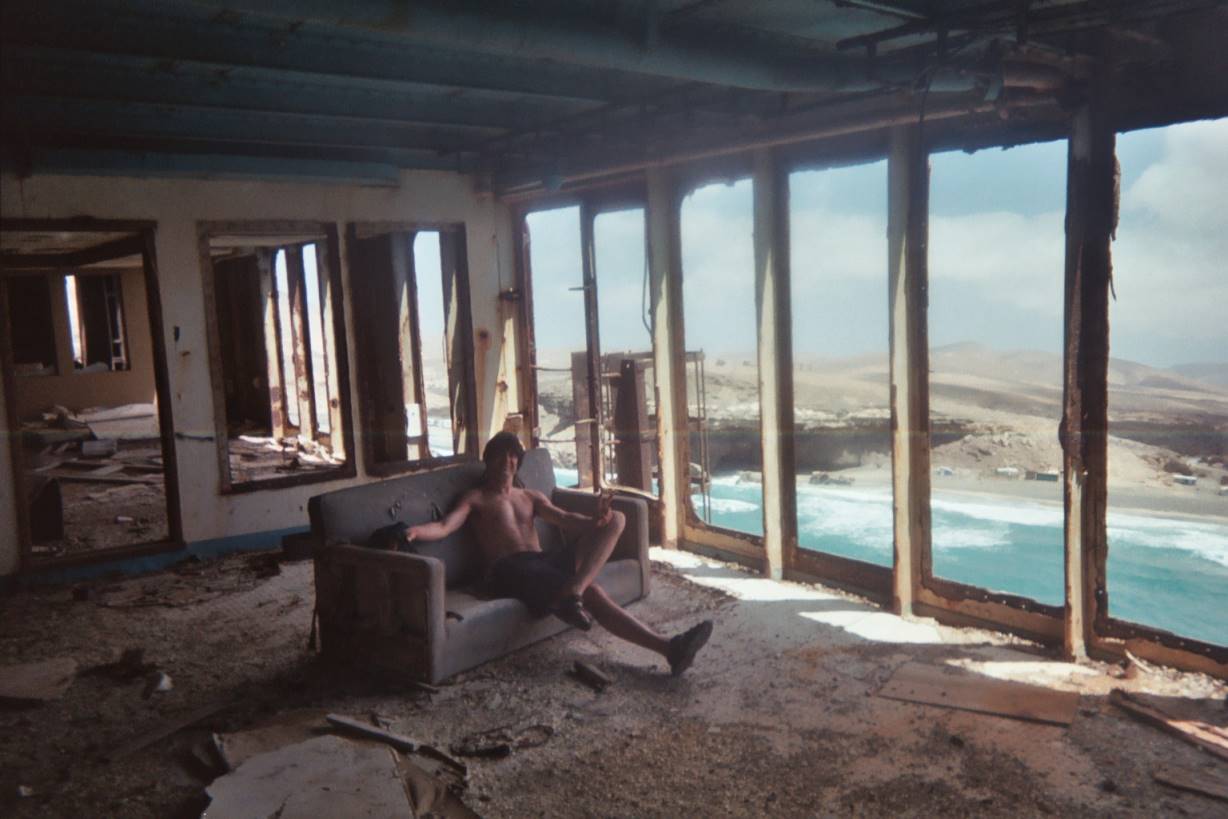 This mail including the so popular photograph from the "Mezzanine" by now was the first contact from Dirk to us in February 2006 directly after our then visit on the island. As you know, he indeed had many more interesting photographs from his visit on board. Three years later he was at the wrecksite again but he didn´t go on board this time. He did not want to push his luck during his second visit as he wrote to us later on.

In February 2007, he eventually had the last opportunity to see the wreck once again when he was very close with us in the helicopter: "Dirk's" kingpost on the seaside was already partly under water at that point (see photograph below). It could not withstand the incoming masses of water for another month ...

Almost a year ago, we corresponded with Dirk a couple of times regarding the remaining propeller then still on board of the American Star: He stood almost next to it during his visit on board in 2003 but still overlooked it then. On of Dirk's e-mails regarding this subject matter and the explanation photograph that he sent to us shows that we did not always deal with the topic American Star dead seriously ...

I do not know how to explain this brain freeze very "unprofessional" of me ... there was probably a screw loose or ... due to all the screws (propeller) I did not have any focus anymore ... do not have a clue how screws look like (as an explanation a photograph again for a better understanding (okay ... the photograph is not a real good explanation).

It does not matter, screw (propeller) back and forth. Reality is that the thing is indeed not there anymore. I think that an underwater photograph of this propeller is not possible anymore but where is the other one? Possibly buried somewhere between the wreck and the beach (unsuccessful salvage). But it is possible to find it when the ocean is calmer and the thing is not buried under the sand. (-:

And again "sorry" and a loose screwed screw hello from the great screw (propeller) overlooking Dirk ...  ;-))

In 2006, Dirk indeed started to search for the propeller during his excursion to the wreck of the American Star - but in vain. Before his departure, he e-mailed something regarding this matter:

... The propellers are gone? Why gone? Both propellers could not have vanished into thin air or went up into the sky! They are laying in approximately five to maybe seven meters deep. Maybe they are not totally covered by sand? You only have to take a very hard look  --(OO)-- and when the ocean permits (current and waves), you will certainly find one. ;-)) I will take a closer look while snorkeling ...

... Indeed, I only swam the whole area on the landside of the wreck (snorkeling). I did not dare to go to the seaside. Also take a peek at the photograph ...

Also, we did not always deal with other subjects seriously: As you know from Dirk's report regarding entering the wreck, he found a cabin key. Only much later, we gave him a key chain that we had auctioned on eBay. Dirk surprised us one day with a painting of the American Star that he had allegedly found on board. As a "proof" he sent us the photograph below:

Also otherwise, Dirk knew how to have fun: He sent us his version of the little incident that had happened on our way to "his" bay (photograph below on the left). After his visit on the neighboring island Lanzarote, we received another shot from him - Dirk's report to the subject "Speculation Around The Stern" that according to some contemporaries is located off Lanzarote - he undeniably did find it!

Dirk who was not only a big fan of the American Star and the then "sister ship" of the America the SS United States (we will report on the latter in our model basement at a later time), as a real Hamburg native he was naturally also interested in all other important ships. Therefore, he was not only on the Color Fantasy to which he sent us a follow-up but he also visited regularly all worldwide known liners in Hamburg's harbor that were anchored there. Regarding some of the new ships like the Color Fantasy he had a very strong opinion, which he stated in his follow-up:

... The Color Fantasy is in reality a beautiful ship. However, with that I only refer to the interior etc. Otherwise, I do not think the ship is elegant: Only a swimming container with a few exceptions. The time of the elegant liners is unfortunately over ...

So, it is not surprising that he planned something with both of them: He listed a snorkel excursion to the American Star's stern on his agenda as well as a visit at the SS United States in Philadelphia which he really would have enjoyed.

However, this is not going to happen anymore and the ones Dirk leaves behind - not only his life partner Heidi and his cat Larry - also his relatives and friends will be mourning like us ...

Dirk, we will keep you in our memories!

... The next day, we were again at the Amstar after our last dinner together. I went to the bay again. The tin can was unfortunately not approachable once again.

But a great shot of that thing is available. I also took a couple of beautiful wooden pieces ...

Since you obviously like to send cat pictures (and possibly look at), I attach one very meaningful picture. This is a typical fat "Hamburger" house cat!

Have a great beginning of the week and try not to get stressed out and annoyed right away.