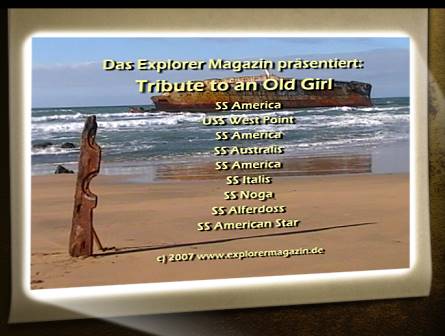 Now, it is finally here - the remembrance film "Tribute To An Old Girl" as we called our video. Many readers have already been asking for it since ...

On the occasion of our visit of the American Star in February 2007, we already announced it: We too wanted to honor this famous ship by producing a video that was also partly done during our helicopter flight above the wreck.

However, this film should be more: A tribute of the many stages that the former AMERICA, WEST POINT, AUSTRALIS or AMERICAN STAR experienced during her diverse history and a last view at the remainders.

And nobody could have ever predicted how timely we reached the last destiny: Only after a few days of our then visit and our memorable helicopter flight, she finally collapsed - the Old Lady. With this, we created a unique tribute since obviously nobody else had another opportunity to make such a film.

We were able to add this collapse to the film as well including some scenes of the last big storm in March 2007 which finished the wreck off and split the bow in two pieces - testimony of the end of an era for many tourists visiting the Playa de Garcey and its famous attraction for all these years ...

Contrary to NDR’s documentary from the year 1999 running about 45 minutes, we only produced a 30 minutes feature film; however, we think that this is long enough for the last cinematic tribute of the American Star. Since we produced this film for the German and English speaking fans of the ship, it is available in both languages on one single DVD.

Also, the scenes we already presented in the preview (see below), you can find in the final version of the film - maybe a little different than expected. And somebody else is part of this film: Dirk Evers also leaving us shortly after "his" ship is seen one more time in a few scenes of the film which will become a very special memento this way ...

The remembrance film now presented to our readers belongs next to the special edition CD "American Star" on the bookshelf and with that to the detailed documentation about the "Old Girl" which we collected throughout the years.

Therefore, we offer our "Memento Package" in two versions: As a video DVD including our CD or the video on the DVD alone. This way, we believe that we will fulfill the wishes of the American Star´s fans and that for a reasonable price that is substantially under the one of the NDR documentary.

We hope that all fans of the famous ship will enjoy our video and that you do not experience too much anguish while watching. But that is most likely unavoidable because our guests at the premier thought that the video will affect you ...

How can you get this video?

You can order by using the order form - we will then get in touch with you!

And here you find a little YouTube-teaser regarding our documentary video "Tribute to an Old Girl" which came on DVD in November 2007 ..!

More videos of the Explorer Team dedicated to the American Star: