We know it: To visit the wreck of the American Star - to really go on board - is not only prohibited but also dangerous. As reported, many of those visitors paid their attempt to enter the apparently close but yet so far away wreck with their lives. 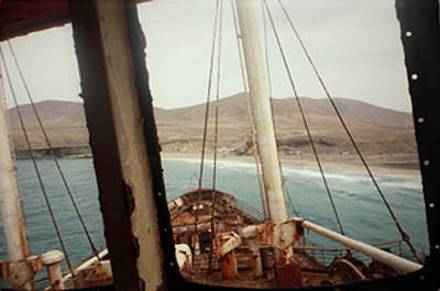 Of course, one or the other visitor would love to go on board like the article´s author: The fascination of the wreck and its partly twisted steel and rust construction on board is continuing.

Therefore, we do not want to encourage anybody even though, at this point, we let those report who were "really" there: On board and deeper-in-between the conglomeration of rust and danger ...

In our 15th appendix of the report´s first part dated November 2005, one visitor of the wreck had his turn: Ingo Turtenwald from Berlin then told what he had found in the year 2002/2003 on board of the American Star.

Here again his then short report:

"I believe that I took (the photographs) in the summer of 2002 (maybe 2003 but not later). I paddled across with a surfboard. The ladder on the starboard´s wall was easily accessible and in good condition. The way up is very beautiful. The flaking off paint, the rust, ... I remember well. And the view.

On deck, you had to hold on tight. Because of the salty surface, it was slippery like soft soap and the ship was leaning enough that you could easily slide down portside. In the hallways, there was lots of junk. You had to climb around. At the bow is a hatch or something similar. You can watch the ocean flushing the hull.

I tied the surfboard with its leash to the bottom of the ladder. Partly it was hanging; partly it was swimming. Then, you could reach the ladder only with the help of an additional rope. There were one to two meters missing; however, you could pull yourself up without a problem ...

There were no difficulties on the way back either. I was only very careful to win distance from the ship quickly. It seems there was a strong undercurrent alongside and you certainly gain respect. Anyway, everything is written much easier than done and I do not want this to be mistaken as instructions. You will risk your life and maybe one or the other underestimates the distance from the beach because of the enormous size of the wreck ..."

In the meantime, an additional-a much more detailed-report reached us by Dirk Evers who had entered the wreck in 2003. He would love to do it again. He is too fascinated by the ship not to attempt it again even in today´s position ...

We do not want to withhold his exciting report and impressive photographs from our readers:

"July 2003, vacations on Fuerte. And then there: Two days admiring the American Star ...

With a compact car on the bumpy dirt road to the western coast. I was fascinated by the wreck at first glance: After a couple of minutes, it was clear: YOU HAVE TO GO ON BOARD!

My girlfriend thought that I was completely nuts and told me right away that several people had attempted to go on board and had not survived (eight dead - I don´t know if this is really true ...?)

It did not matter. At that time, we had high tide and the welded ladder was accessible (at least, it looked like that from the beach). So flippers on and over to the ship: The current was deadly. I had to change the direction several times. Finally, I was near the ladder but I was not able to reach that thing. A high wave then lifted me so that I could grab the ladder. That was it! The waves were growing stronger and I could not store the flippers anywhere but neither could I leave them on to climb. And without protecting the feet, it was impossible to do anything ...

Injuries the first day: various abrasions on the arms caused by the ladder and the wreck´s starboard wall ...

On the beach, I met a fellow who was as "nuts" as I was: He observed my first attempt with his binoculars. We decided quickly: WE HAVE TO GET ON BOARD!

He was a very good swimmer. I was again with my flippers and this time also with shoes and camera in my backpack. At the wreck, almost the same procedure: wait for a really big wave and grab the ladder. Again, I got a couple of abrasions and a cut on my left arm. A lot of blood; however, in connection with water it looks more dramatic than it really is. It does not matter ... I was on the ladder!

I quickly discarded the flippers, stored them in the backpack, and put on my sandals. My companion had more luck since a high wave lifted him and he could pull himself onto the ladder ...

I can sincerely claim: To reach the ladder was the most difficult part during the whole affair. In 2003, the ladder was still in good condition: Badly rusted but massive steel beams. It was not a problem that the ladder was so high; however, you must not have acrophobia in any case!

We were on board of the American Star for about three hours and saw pretty much everything that you could reach at that time: The wooden planks towards the coast were mostly still okay. On the seaside, it was a different story and you had to pay close attention to where to step. Everywhere, rotten wood and everything was rusted pretty badly. The "stern" was in horrifying condition: thick torn steel plates and large broken steel beams - an incredible sight ...

Everywhere, there was junk on deck: Many things were already dismantled. Piles of copper-cables were scattered around. The interior of the ship was not different at all: junk everywhere. I waited in vain for my drink at the bar´s counter and nobody played anything on the still existing piano (unfortunately destroyed) (note from the editor: To compare the pictures of the first class´ dining room - left - and of the ballroom - below - look at the photographs of our history report SS AMERICA by Bill Lee!).

The partly existing toilets have possibly still been used once in a while after the ship's running aground ... (gross

But I still did not skip any accessible rooms: I wanted to see everything. On the lower decks, it became increasingly darker and many noises were creepy - wind, waves, and pigeons were to blame. Without a flashlight nothing was possible anymore down there. After many photographs and two discovered cabin keys, we were done with our sightseeing tour: We climbed down the ladder and returned to the beach - luckily without a problem.

After reaching the beach, it was clear right away: I HAVE TO GO AGAIN IN THREE OR FOUR YEARS! What a pity! But it is almost impossible now (or maybe it is?). I hope that she will be recognizable as a large ship for a very long time.

After this experience, I like to say: This will be an unforgettable little adventure for me; however, it was not exactly harmless and in various situations, it could have ended badly ..."

"... I had the cameras only with me on the second day after it was clear that I had to go on board (no matter how!). I bought those things quickly in a photo shop. Those were inexpensive waterproofed disposable cameras. You can see that considering the quality of the photographs. I still have various photographs from the interior that are quite dark because of the modest flash ...

Our girlfriends were observing us anyway. I think they were more afraid than we. When standing at the bow (the Titanic way), I saw a group of people pointing their fingers at me. I assume that some people observed us (almost four hours on board the Amstar do not remain unnoticeable).

When we returned to the beach later on, the police arrived at the beach and looked at the ship (?). It is possible that somebody reported us to the cops. Just in case, we cleared the beach.

The uniform shapes on the beach are RVs and awnings from "wild" campers. The fellow accompanying me on the ship had a conversation with one. He then told me that camping was prohibited there but since everybody was from the Canary Islands, it was not a problem at all ...

Oh yes, one more thing: I carved my name into the seaside's mast. When the American Star will really vanish some day, then something from me will sink with her. I don´t want that.

And therefore, she will definitely stay with us for many more years.

Take it easy. Keep the ball rolling resp. the Amstar with many more new information and photographs."

By now, we have a real ghost story about the American Star in our collection thanks to Bill Lee - a welcomed addition to the legends surrounding the famous wreck!

But how did the visitors on board really experience it? After being confronted with Bill´s ghost story, Dirk Evers, author of the above report, told us about his experiences ...

Yes, Bill´s story is mystically written. I could easily hear noises on board of the Amstar. As already described, the different noises in the dark corners of the wreck were especially creepy. Waves, wind, and lose objects were responsible for this "kick." However, I did not see any seagulls or other maritime bird species. There were only pooping pigeons. But seagulls sound much better in a ghost story on board of a ship wreck.

By the way, I briefly saw a "ghost!" The fellow accompanying me on the ship left me for a short time (although we stayed close together). I walked back a bit in order to see where he was. When suddenly he stood behind me and said unexpectedly "here I am." I was totally scared and almost s... in my pants ...

Once again he was there, "our man on board", Dirk Evers.

This time he was not on board but very near to her: