We previously wrote in the first part of this report: To visit the wreck of the American Star - to really go on board - is not only forbidden but also dangerous - even life threatening. And due to the present position of the ship, as it was presented in the summer of 2006, it would have been foolish to enter the wreck again.

And therefore, this time, it was completely different even though he was there again - "our man" at location, Dirk Evers, whose story we already issued in the first part of this report ...

In this instance, he was not on board like exactly three years ago in July of 2003; however, he was in frightening proximity to the old lady - and as the last time, it was a pretty eerie visit. Then on this occasion, he met a highly unusual "guard" of the ship ...

And he discovered something else during his most recent visit: The American Star starts to rename herself in her old days. Back again to AUSTRALIS ...

Here are his exciting story and fascinating photographs:

"After my first visit in 2003, I was again directly at the wreck of the "American Star." The first look was horrifying for me since some of her fascination was lost due to the present tilt and the loss of several structures.

Actually, after entering and visiting the wreck for several hours in 2003, I planned to repeat the same thing in two or three years. The regular visit of your webpage with current information and photographs already demonstrated that this would be almost impossible.

We spent altogether five days at the Playa de Garcey during our two weeks stay on Fuerteventura - end of July until beginning of August 2006.

Right away, on the first day, I snorkeled over to the wreck in order to be as close as possible. There were almost no waves and we had high tide, which is very important in order to reach the wreck without harm (see underwater photographs from parts of the wreck which can be very dangerous during low tide and high waves).

I snorkeled along the wreck and around the bow. However, the vision was very limited since there was hardly any sunshine and, consequently, it was pretty much too dark for any further adventures. Besides, there were high waves on the seaside and an even more dangerous undertow than on the landside (as already mentioned in 2003: the current is brutal!!).

I swam to the now completely town ladder (which you cannot grab anymore even during high tide due to the tilt, see also the photograph). In 2003, I got some scratches when entering the ship. This time, I remained "scratch free" when holding on to the wall but I had another bad surprise that led to a different kind of pain and wounds: A sudden electrical shock from the outlet on the right forearm! An electrical shock - but where did it come from? A look down the ship's wall through my goggles and I saw an unpleasant jellyfish swimming next to me!

My arm hurt up to the shoulder (the burns are still there after three weeks). That was my last visit "directly at the ship!" Should I visit Fuerteventura again and then of course the "Amstar", I will definitely only take pictures from the beach.

My guardian angel will not look out for me again for a third time: The up-to-date number of people who lost their life on or at the ship is currently 30! I found out about it only later on and that is reason enough not to ever risk it again. In my opinion, it is not worth it anymore: A visit on board not possible any longer ...

The remaining days, it was becoming more and more windy at the Playa de Garcey: The last day, the waves were enormous. The deck of the American Star was flooded half way. How bad will it look during the infamous fall/winter storms ..?

Bits and pieces of the wreck are still swept onto the beach. Mostly wood, of course, that is collected by the always-present "wild" campers (predominantly Canarios) every morning. When dry, it is used for campfires and barbecuing. Somehow, it makes you sad but what should you do with all the leftover wood? If you want to take a piece of plank or handrail, you can try your luck (with good shoes - I, of course, slipped with my great sandals at an elevation. At least, I got some scratches again!

) There is lots of wood that definitely does not belong to old Euro wooden palettes. And also a toilet seat, maybe "the toilet seat ..."

For now this: During low tide, from the coast you can see a ladder through the open side inside the wreck. It looks like that this one was indeed attached later on. It leads from the water surface up into the ship. You can see it well during sunshine and with good binoculars. Also with binoculars you can notice the letters "AUS" very well-parts of her former name: the AUSTRALIS. You can find those in front of the name AMERICAN STAR. Maybe, this old lady will change her name again?

Hello to all AMERICAN STAR fans and especially to the Explorer Team, Dirk." 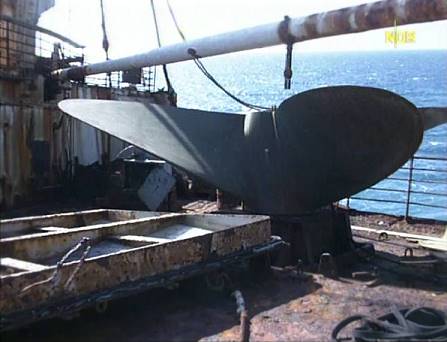 Thank you very much for your exiting story. And as an added remark that we discussed with him:

During his snorkeling, Dirk did not forget the two propellers that had been stored on the ship's forecastle and we had mentioned it. Due to the poor visibility and the dangerous current, he could not explore the propeller fallen off the ship towards the seaside in April 2006. The other propeller already fallen off towards the landside in the mid-nineties during a rescue attempt by locals was not to be found anymore.

However, this is not surprising since we do not know the exact landing spot of this part and the ocean floor might have changed considerably due to the strong currents. Also, the ship might have moved onto the spot as long as the propeller fell straight down along the wall into the ocean.

Well, no matter what, the ravages of time have taken care of it ...