Dusk settles on the western coast of Fuerteventura Island in the Canaries. In the tidal wash of this desolate and exposed spot, the rock-racked, rusting remains of the SS AMERICA await yet another night of flickering moonlight, crashing waves and howling winds.

Her decks and passenger spaces, torn open by the sea and pillaged by local islanders in their time-honored fashion, no longer are a moving island of light, music and merriment. She lies, dismembered and disemboweled, pinned to that remote point of land where her fortune ran out. 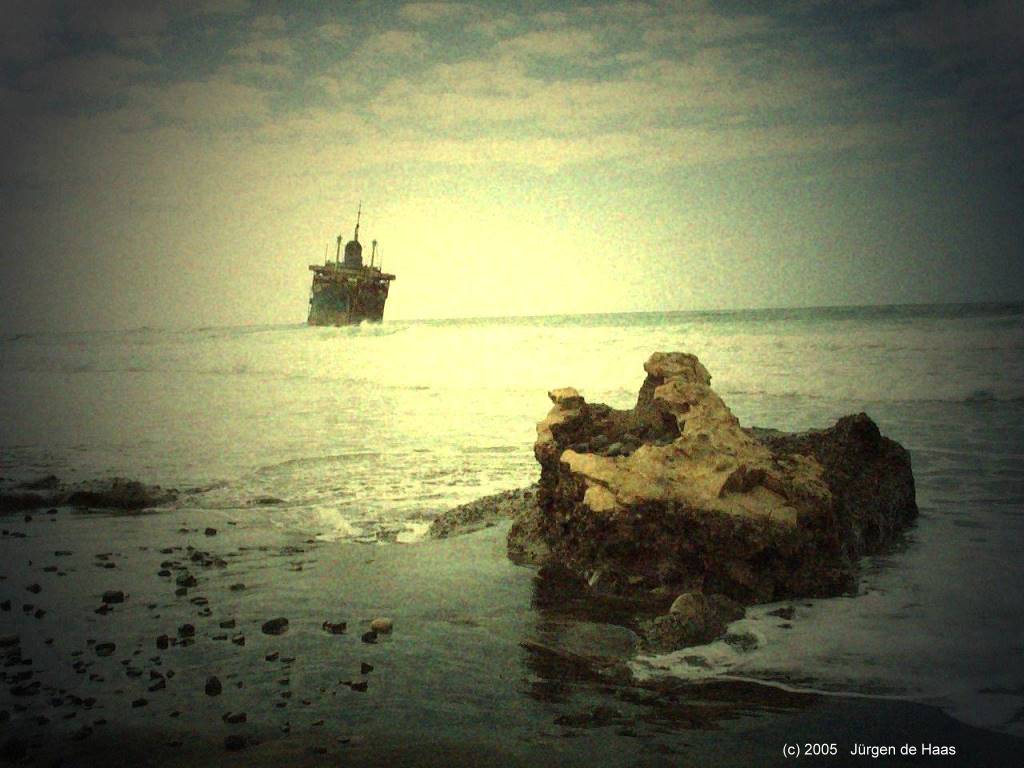 She no longer moves gracefully through the water; instead, mountainous surf washes relentlessly into what remains of her torn and exposed midsection - and even through a huge, irregular opening forced in her forebody.

Sea mist blows unimpeded through smashed windows and through weather deck doors left open or even removed completely; mixing with years of accumulated dirt and grime - and the unwelcome residue of countless, indiscriminate gulls. The result is a soggy, almost unimaginable coating that hides the very real danger of crumbling decks for any unwary trespasser. The once-proud Queen of the American Merchant Marine, after over eight years of abandonment, is methodically being reduced to just a memory by the elements.

As darkness envelopes her corpse, the only sounds, aside from the eternal noise of the ocean, are of the wind rattling her remaining rigging and railings, the rustling of what little loose gear and haphazardly scattered articles still remain, and the occasional cry from nesting sea birds.

The Queen is irreversibly torn, tarnished and tattered. Clearly, she is indisputably dead. Or so it seems.

But perhaps - just perhaps - the Queen's spirit lives on in a mysterious manner not witnessed, much less understood by mere mortals.

To view her remains at night from a point fine off her still-imposing, gracefully-arced bow, she seems intact; almost as if silently sailing in a darkened state, reminiscent of her many successful passages under similar conditions during her troop transport years as - ironically - "The Grey Ghost" ...

It would not take very much to imagine curious motions in the reflected moonlight on that distant shore. Mysterious motions accompanied by strange sounds - seemingly more human than natural. Listen …

Is that the soft laughter of a ghostly passenger enjoying the ambience of what was once AMERICA? Or just a sea bird cooing; enjoying a brief, sheltered respite in what remains of this once-mighty passenger liner? Is that the tinkle of glasses raised in a toast to her memory by some supernatural passengers? Or just the wind-driven movement of shattered crockery left behind?

Is that the rustle of floor-length evening gowns as her ghostly inhabitants search vainly for her once-sparkling - now demolished - Ballroom? Or just the wind, again, moving the ruined remains of curtains at broken or missing windows? Is that the whispers of young lovers entwined in the shadows of some remote corner of her upper, exposed decks? Or just the wind, once more, playing upon the rigging and irregular surfaces to produce hauntingly similar sounds?

And is that the sound of footfalls from her soldier-passengers or navy crewmembers - deceased members of the Greatest Generation - eternally roving her lower decks? Or just the thud, thud, thud of loose gear being repeatedly - endlessly - banged about inside her rust-streaked hull by the sea?

Such supernatural spirits may well haunt her until the time her remains slip forever beneath the very environment over which AMERICA once reigned supreme. Or maybe not; for perhaps such images are but the product of an admirer´s over-active imagination ...

But to those faithful few; those who still remember - and care - the Queen´s spirit will live on, long after her physical being is but distant and dimming images. And, to the credit of the human spirit, precious memories - of her hundreds of shipbuilders, her thousands of crewmembers in war and peace, and her countless passengers who have predeceased her - will live on as well. For it is these composite memories which are the very essence of AMERICA´s spirit.

And so … LONG LIVE THE QUEEN!

Remark: This is an article Bill Lee provided to the World War Two crew of the USS WEST POINT at one of their reunions a couple a years ago - when the American Star could be found at the Playa de Garcey in her former state which we will never forget ...