Speculations Around The Stern: Could It Have Happened This Way ..? 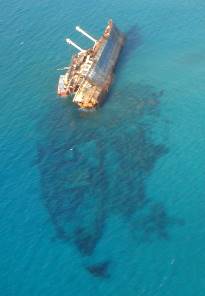 Of course, we still do not know it exactly and we will not know one thing or another until we will be able to take a look at underwater pictures that could reveal further details about the stern's sinking.

However, the photographs dated August 2006 showing an aerial view onto the sunk stern invite to many suggestions and speculations. Stephan Robmann interested in nautical matters sent us his own very convincing and conclusive version.

He also illustrated his description of events which is a summary-level impression of what is reported in our article about the "Autopsy" of the American Star.

Here is the "Story of the Stern" how it could have happened ...

One theory how it could have happened:

The stern ran aground at the break mid-ship, however, in the rear area of the propellers and the rudder, the keel does not touch the ground. The ocean attacks the portside and rips big chunks out off the ship's wall within the next years. The decks start to bend at the running aground point.

The stern's portside starts to sink and due to the additional weight of the incoming water into all decks and the instable wall, the hull moves and deforms (red line shows the outlines) while the top of the stern seems to remain straight. On the portside, the broken off pieces form a debris zone ...

The distortion of the deck towards portside continues to grow and the additional structures very visible from starboard start to deform. You get the impression that the stern rolls portside. The stern on the portside starts to stand on the ground which cause the bent decks and structures to be pushed starboard by the currents.

The relentless ocean takes the decks and their configurations unprotected from water, piece by piece. First there is a piece missing below; then the upper decks slip deeper and become bent (we could observe this process on the forecastle this year). At the same time, the waves' ferocity distorts the deformed hull more and more towards the direction of the currents.

Note: My assumptions regarding the destruction are based on observations of other wrecks and static of the ship's body. I assume that most of the deck structures are still in existence: however, the hull is distorted and flat through continuous pressure: The upper decks and structures were swept away by the current and waves. You can find those now on the portside in a field of debris ...

Appendix: And Stephan Robmann went even further: Additionally to the above illustration, he took another look at Christian Niehoff's photograph and found something interesting (click on the photograph on the right):

Unfortunately, I cannot dive either. Therefore, I took another look at the two photographs and connected everything I saw with white lines. Something surprising came out of this. Maybe I get distracted by the currents and shadows but what you can see down there cannot be an illusion ...