Visit of the Wreck: Reunion And Preparations ...

Extensive planning preceded this year's visit: Of course, Christian Niehoff was told early as well as Bill Lee, the unofficial SS America's historian, was informed about what we were going to do this time. Even Bill's acquaintance Elizabeth Fletcher wanted to know about our trip who as an author of the children's book about the SS UNITED STATES ("Grandfather's Ship The SS United States") and soon also about the AMERICAN STAR ("The Last American STAR") will be introduced at a later time.

We still had to agree upon the travel date with Dirk Evers. He postponed his vacations planned for New Year's Eve 2007 two months, after he had found out about the helicopter's flight to the wreck.

Bill was pretty shocked by today's condition of the wreck which our current and constant appendices show. Since he is a regular participant of the USS WEST POINT's veterans meetings showing a decreasing number of participants, he suggested combining our trip with honoring one of the already deceased veterans.

Said and done: Still in Germany, we obtained a wreath bearing the following inscription suggested by Bill: "In memory of the men of WEST POINT, who once sailed her into harm's way and have now gone to their eternal duty stations." That we, as descendants of the former world war enemies, wanted to apply this remembrance, was received very well by Bill: transatlantic communication put into practice!

However, we did not only drop the wreath but we had more to do: representing other readers of this website. Matthias Kusch had asked us to place a rose at the Playa de Garcey for all readers who would not be able to go themselves this year. He e-mailed us:

"When you are there to visit the "old lady" could you drop a "red?" rose in the water? I will not be able to fly to Fuerteventura and, unfortunately, it is safe to assume that she will not last another year ..."

That way, our approaching excursion is almost turning into a "mission" because we do not want to disappoint the loyal fans of the ship with such a long and diverse history .

The first sight of the wreck after about one year upon arrival at the Playa de Garcey on February 22, 2007 was not pleasant: Even though we are familiar with every current development of the American Star's remainders due to countless photographs we have regularly received. However, it is different when you have the sad reality right in front of your eyes / in plain sight .

We took several photographs of our objects - only later, we discovered that due to today's lighting conditions, the wreck seems to have a new "face" - it seems to produce tears which the wild ocean relentlessly sprays through the front portholes (photograph above right).

And what might the ancient "stone face" (photograph above left) have thought now observing the wreck more than ten years in regards to our activities with the wreath and rose for the ship ..?

But as we know, it has seen plenty during this time. Therefore our visits at the Playa de Garcey were more or less unimportant events during all these years when thousands upon thousands of tourists have been at this site. And many of those e-mail us regularly like the following in the past weeks, among those, former "Fuertewolf" with an hello, Guido Klein and Hans Martin Liehr with information, Dirk and Joerg Schmidt with questions as well as Elisabeth Domayer and Chris Herzer with emotional reports - excerpts and examples from our mailbox as storytellers of the American Star .

I took the time to look at the latest photographs of the wreck but this is a very sad thing. Of course, my wife and I are heartbroken to see the remainders in the raging ocean. As you know, both of us were strolling across the deck a long time ago and it was a very good time . We will go over to Fuerte, maybe in the summer, and look at the leftovers. 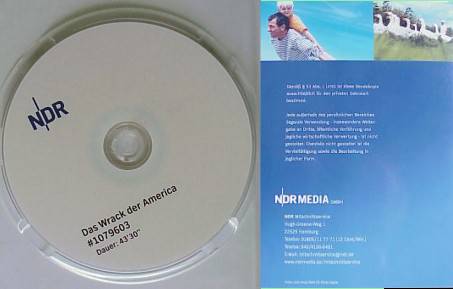 By accident, I found the Explorer-Magazin's website and since then I cannot stop to visit the "American Star" before she will completely disappear.

In this connection, I wanted to get NDR's report about the wreck. Unfortunately, I received a reply that NDR only possessed the rights of this production for a limited time since it was a purchase production and not their own. Therefore, it not possible anymore to offer recordings.

Note by the editor: In this matter, we received a correction by the NDR: It is still available!

Today, I was talking about the topic "American Star" with a colleague at work. Among others, we spoke about the still existing anchor (he would love to have such a thing in his garden). I just looked at a couple of photographs and then I saw it again. A new puzzle that you will probably resolve in no time ...

The anchor on the starboard side is still nice to look at. The other side brings up questions. Why is there an anchor even though in Piraeus's harbor there was none? Was that one indeed attached later on? It does not seem to be the same type of anchor as on the starboard side, or does it?

Note by the editor: Regarding the anchor story, as you can read in the "autopsy report", the ship threatened to sink in the Greek harbor. Then the ship slanted to the side in a way that either the anchor chain broke or the anchor was cut off in order to avoid the ship's sinking. Later, before the last tow, a "replacement anchor" was gotten via Greek style - it did not have to fit exactly .

14 days ago, I ordered a CD about the American Star from you. This was delivered within five days. Thank you very much. I am very happy.

Unfortunately, I did not find anything in your reports about the welded ladders; however, it also possible that I have not read everything yet. Those should have been attached before the accident because there are photographs when the ship was not broken into two pieces and the ladders were already installed.

If they had been there before, then the question has to be raised why there was one at the bow and one at the stern. You could not have known before that the ship would break at exactly that spot - coincidence ..?

Note by the editor: In the report about the NDR documentary from 1999, the ladders were mentioned. They were welded outside only for the last passage - apparently one had a hunch that those would be needed soon .

As a regular visitor of your American Star site, I like to make a huge compliment regarding this great webpage. I found another great website providing many pictures and talking about American Star's history as well as many other big ocean liners. Maybe other visitors are interested in it as well.

I would be happy about many more photographs of the American Star even from the "past." Maybe parallel to the chronological reports as a gallery?!

I follow the report about American Star's collapse with great interest. It breaks my heart when looking at the photographs.

In 2005, I visited the wreck with my husband and son and we were totally taken by her. Actually, it was by chance that we got to the wreck because there was nothing about it in my travel guide. My husband heard something about it and then we saw the postcards and started the search. Of course, we took the first shortcut towards the ship and drove through the military area. It was a very adventurous trip and I was happy afterwards that we returned to a normal road without problem.

Then we could not imagine that the American Star would deteriorate so fast because it was not our first time in Fuerteventura but we did not know what we have all missed. So, we are happy to have seen the American Star for real. Back at home, we were looking for pictures and reports about the ship's origin and therefore we participate in her collapse. And by accident, I found your website and saw that you have regularly been following the collapse for years.

I just wanted to say that your photographs and the documentation are very successful. I follow your updates about the almost sunk American Star on a regular basis.

Keep up the good work and I am anxious about new photographs.

For two/three months, I follow the stories about the American Star and would describe myself as a layman in this case. Only one thing caught my eyes: Rarely, I have seen that so many people form such a close and emotional relationship with a ship and I think that this is simply impressive and I am mesmerized again and again when visiting your website. Thank you very much for this emotion.

We are back at location with remembering these and other lines by our readers and we are captured again by the plain beaches' atmosphere: In front of us the collapsed wreck hit by relentless waves (photograph left below), next to us on a hill a film team from Fuerteventura TV producing a film in front of this one of a kind scenery (photograph in the middle below), and close by our "Jumping Wheel" tied to our Defender is steadily ascending and descending due to the fresh sea breeze and offers an enjoyable contrast in front of the rocky landscape (photograph right below) - an environment promoting an almost meditative atmosphere.