- Appendices "Search for the wreck" -

As you can learn from the report about the American Star mentioning Fuertewolf, he himself was a passenger on the SS Australis (as she was called at that time): In February/March 1970, on her 23. voyage, the ship was "southbound". And he still has many memories of this cruise with the ship - to this day important for him and his life on Fuerteventura (Note of the editor: More about "Voyage 23 southbound" in our article "Ships in the Night").

Only three cruises later, during "Voyage 26", as mentioned in a previous report, there was a fire on board starting in the kitchen and being extinguished after nine hours. Only after repairs in the Fiji Islands - taking several days - the cruise could be continued.

During this voyage, there again was somebody on board of the SS Australis who got in touch with us. Our new reader, the artist Iris Resch-Grimm from Friedrichsholm participated on this cruise. More in her mail:

I found your webpage by accident. Please take good care of "my" ship. I like to see it sometime!!

I cruised with her to Australia - still going around Cape Town - and back, when on Oct. 22, 1970 a fire started on board between New Zealand and Fiji. Then I was in line in front of "lifeboat 8" and two members of the crew tied my swim vest so tight that I could hardly breathe. When protesting, they remarked laconically that once I jump down, the vest would slide over my head ... and in the dark ocean you could see the all-time present sharks ...

I had to hop from one foot to another because of the hot deck. I could tell many more stories about that ... Nonetheless, after arrival, the ship was in total disarray. You have to imagine that besides the fire, there were only two bathrooms for more than 2,000 passengers on the sundeck that were malfunctioning soon. Many did their "business" over board ... in the ballroom diapers were fluttering ...

By the way: Please send my regards to the artist Klaus Behrends illuminating the ship so beautifully many years ago that was shown on German TV. I received a copy from director Preckel and a gigantic blueprint of the ship from Behrends. Myself I have many memorabilia: various "Fiji Times" among others reporting about the fire. I bought those because then I thought that nobody in Germany would ever believe me. The Chandris Line did also everything to cover all up ... did not even mention it in their daily onboard newspaper!

The artist Klaus Behrend living on Fuerteventura and mentioned by Iris brought the wreck back to life with his exhibition in Tarajalejo. He also peaked curiosity with his exciting light installations in conjunction with the American Star.

The mail from Iris inspired us enough to visit Tarajalejo during our next trip!

Beginning of September 2004, our reader Svenny was on location at low tide. We thank Svenny for the following photographs showing clearly how vast the American Star's problem has become: The whole at the bow is growing relentlessly - how much longer ..?

We received a mail from Sigurd Brauer that we really appreciated. Sigurd as well kindly provided us with photographs (You can see another picture from January 1994 when clicking the large picture below).

While updating my homepage, I found your website on the Internet. Fantastic page! ...

Since I am myself very taken with the wreck of the American Star, I put together the-hopefully-interesting history in German. Information from the Internet served as the foundation. Partly, I used pages suggested by you. Though, I had to find out during my search for information that I am the only one possessing photographs from the very first day of running aground. ;)

Since I lived on Fuerteventura from 1991 to 1995, it was not a problem. Maybe you can take a look at my homepage, I would really appreciate that (there is also a guestbook).

I am looking forward as well to hearing from the "Explorer Team." Maybe we can meet during your next expedition to the island since I will move back in five weeks. Should you need current photographs or another ship runs aground, I am right here.

Jan Liska - following the explorer team's footsteps to Northern Norway, as we know since Norway 2001 and since his visit to the northernmost confluence point of Europe - listened to our recommendation to visit Fuerteventura and the American Star. Here are a few of Jan´s current photographs from his visit on October 12, 2004.

And since he (and his "race mouse"

End Of November 2004: Another Mail From Fuertewolf ...

Yes, I wanted to write a few lines and talk about the wreck: Yesterday, I did a tour again and the military has been there for five weeks. There is banging and shooting everywhere. They are there with armored tanks and howitzers - it must be dozens. The tour was good; however, I had taken another route that is not so great. The ship - once proud - looks increasingly worse: The back will probably break off soon. I hope it will take a while but who knows when the storms will start before long ...

Since yesterday, there are swarms of locusts coming from Africa, it is horrible: The whole garden is full and I have to chase them away otherwise they will eat everything ... Now, I have a chip from Vodafone G3. This is great. I do not have to go as often to the Internet Café - only for downloads and virus updates.

Later,
Wolfgang and Biggy from the island.

Wolfgang, greetings from us as well! As long as nothing prevents us from coming: See you soon - February 2005 is coming!

Antonio sent us "sunny" wishes. If we understood him correctly, tourists also drive his quads through the military zone - then have lots of fun!

The explorer team was lured again to the wreck and we paid her another visit (more about this in our report Fuerteventura 2005). This time, we had four-wheel drive again and we could almost drive up to the ship.

While Fuertewolf unfortunately became sick and therefore we could not do a tour with him, we met Antonio from FuerteFunFactory on location. As usual, he was with a group of quad drivers at the wreck and, obviously, after saying hello they were "flying" around the ship ...

And then Antonio had to tell a thing or two: For instance, about the military blowing up the stern and especially attacking the bow of the ship in order to decrease the resistance of the waves. Or about the highly visible posts rammed in by the military as well in order to stabilize the ship against a further shifts. As you can see, the American Star will cause many more stories ...

We hardly left the island and we received reports from Daniela and Rene as well as from Cora Herberg who visited the shipwreck a couple of days after us and for the first time. Especially, we liked Cora's mail and her photographs ...

After we are back from our vacations and the American Star in particular fascinated us, the cable of our modem was glowing at home and we read a great deal about this ship.

Only this, the ship is still "standing" and creates such an eerie feeling that can be simply fascinating. In any case, we will continue to visit your website and hope that the American Star will hang on for a while ...

During my research about the impressions from our vacation on Fuerte, the Villa Winter and the American Star among other things, I stumbled across your website.

One tear or another has formed because of mails published by you. We were there from February 21 to 28 and had never heard of the Star. We could not find the way and did not want to give up until we would have found the Star. So without further ado, we drove through the military zone with our rented Citroen Saxo.

And then she appeared-between the mountains - as described by you.

She captured us as everybody else over there. We wished that we would have more time to spend there but the day came to an end and we slowly had to start our way back to Corralejo.

Thank you for all the information concerning the Star that I was missing. You keep on imagining a whole lot after obtaining impressions. To know the facts further completes the picture. I hope that my husband and I will have another opportunity to sit on the beach and to enjoy this sad but incredibly beautiful image. As she could capsize any moment or break apart.

How fragile a colossus made of metal appears to be. We took many photographs and filme that we can offer you.

I wanted to say hello and to send a couple of photographs of the American Star (there are fewer and fewer) from photo shoots across the island.

Best wishes from the island,
Wolfgang

We took Wolfgang´s mail as opportunity to expand our "American Star Deterioration Puzzle" with the latest photographs presented to us: Now by the year 2005 ...

Topic American Star and art: We received a mail from Thomas Pilger talking about his photographic work:

I am a fan of your Explorer homepage, especially to stay up-to-date with the American Star. In October 2004, I saw the wreck for the first time during a vacation with my girlfriend on the island.

As with so many, we had the same experience. The first impression was simply overwhelming. The wreck did not let us go anymore. And I planned to search for information about the ship right after the vacation. During the research, I found your website. Lucky me! Fantastic information, fantastic photographs, fantastic writing.

From time to time, I come to this webpage and every time I hope that the A.S. has not capsized yet. This fall, I like to go there again and then in regards to photographs to be better prepared. Unfortunately, this was not the case last year. I made a few but very nice pictures. With that I get to the topic: Taking photographs is my hobby and I turned a photograph of the A.S. into a painting on the computer.

I thought that you maybe like to use the picture. I think it came out pretty well. I have an enlargement on my wall; the original photograph is hardly recognizable ...

Of course, we included the "painting" from Tom in a report called "Art At The Wreck", since this deals with art of distortion inspired by the stories and atmospheres around this famous wreck...

But in this appendix, we are not only dealing with art but also with "science:" We tested the latest offer from Google and searched for our most favorite wreck at the isolated west coast. And we were stunned: We found a degree of detail letting us see the deck of the ship. More in our report: "Google Earth - Navigational Help Or Game?" 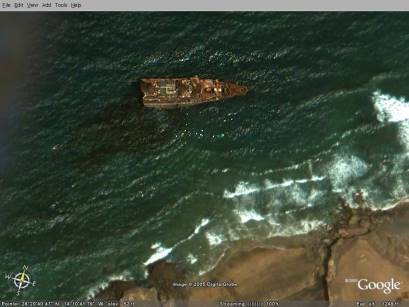 Continuously, we receive questions about the wreck and many like to get something about the ship for instance as a gift. We like to remind you that for this purpose we created a CD Special Edition. See the link below!

And there is more on the next webpage, because numerous reactions and events concerning American Star require this step: